“There is no passion to be found playing small—in settling for a life that is less than the one you are capable of living.”
-Nelson Mandela
a South African anti-apartheid activist and politician who served as the first president of South Africa from 1994 to 1999. He was the country's first black head of state and the first elected in a fully representative democratic election.

This week's email is packed with a plethora of ways to get involved in our community: there are 2 new Community Notices, a 5 Minute Action of the Week from CASP, 2 events happening TODAY (Sunday, January 22nd-Happy Lunar New Year!), 2 new events happening this week, and 4 new future events happening in the coming weeks. We encourage you to browse through this email with fresh eyes (and your calendar handy) and consider how you want to get involved in the continual evolution of Windham County: your talents and opinions are invaluable here!

5 Min Action of the Week from Community Asylum Seekers Project (CASP)
President Biden has announced a suite of new asylum bans to keep people from coming to our border and asking for protection. These include a ban on asylum for anyone who passes through another country on their way to the U.S. and doesn’t request asylum there first, as well as a potential ban on asylum for people who enter the U.S. without first notifying a border agent.
These are both policies that Trump pursued during his time in office and that were struck down as unlawful. On the campaign trail, Biden denounced these policies and pledged to end them. If resurrected, they will result in people being rapidly deported to the very dangers they have fled.
We have a limited window to convince the administration to walk back its plans. President Biden and our congressional representatives need to hear from us today!
We're proud to report that U.S. Senator Bernie Sanders has already publicly opposed the asylum ban. Let's make sure our entire Congressional delegation does the same. 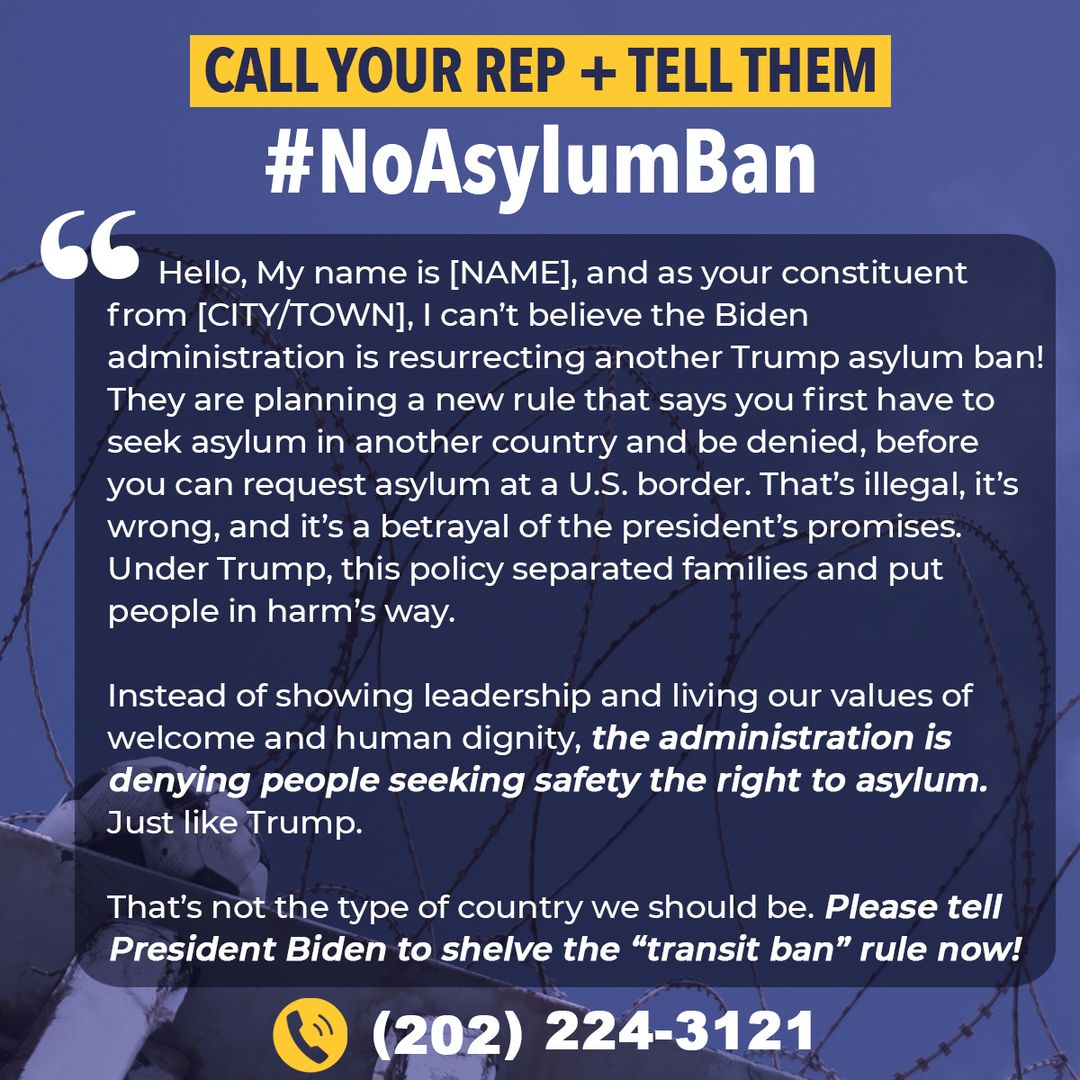 From Southern Vermont Sister District:
(Editor's Note: I've volunteered with Southern VT Sister District as a Soup Chef for over 5 years now and it has been one of the most rewarding experiences of my life. This program is amazing! - Joanna)

Next Soup Subscription!! Eat soup and support Democratic state organizations.
Use this link to subscribe and get yummy soup from February through May. The first soup on February 20th, 2023 (sign up ends February 10th, 2023).
Your ‘soupscription’ fee will be supporting the Sister District State Bridges Program, which supports Sister District volunteers across the country to fund raise for organizations leading year-round power-building work. It's a win-win-win. Eat soup, give soup, support Sister Districts important work!
Sign up to attend any of these events by clicking the State Bridges link above. These events will feature folks on the ground who are building democratic bases in key states as well as one of the leaders from the National Sister District project.

Windham County Community Resilience Grant Request for Proposals
Apply Now HERE.
The Community Resilience Grant is a collaboration among the VT Department of Health, VT Community Health Equity Partnership (VtCHEP), United Way of Windham County (UWWC), and a Backbone Steering Committee (BSC) made up of 4 community members from around the county - facilitated by UWWC. The contents of this RFP were reviewed and approved by the BSC.
There will be multiple grantee support totaling $150,000, funded directly by VtCHEP - to address health disparities in Windham County in accordance with the Social Determinants of Health. We invite and welcome proposals from individuals and organizations serving people in need in Windham County, Vermont. All written proposals must be received by Wednesday, February 15, 2023 at 11:59pm for consideration in the selection process.
Information sessions are available! The info sessions will be held on January 31st, 2023 at 5 pm, February 2nd, 2023 at 12pm , and February 4th, 2023 at 12pm.
Please go to the Zoom registration page HERE to register. 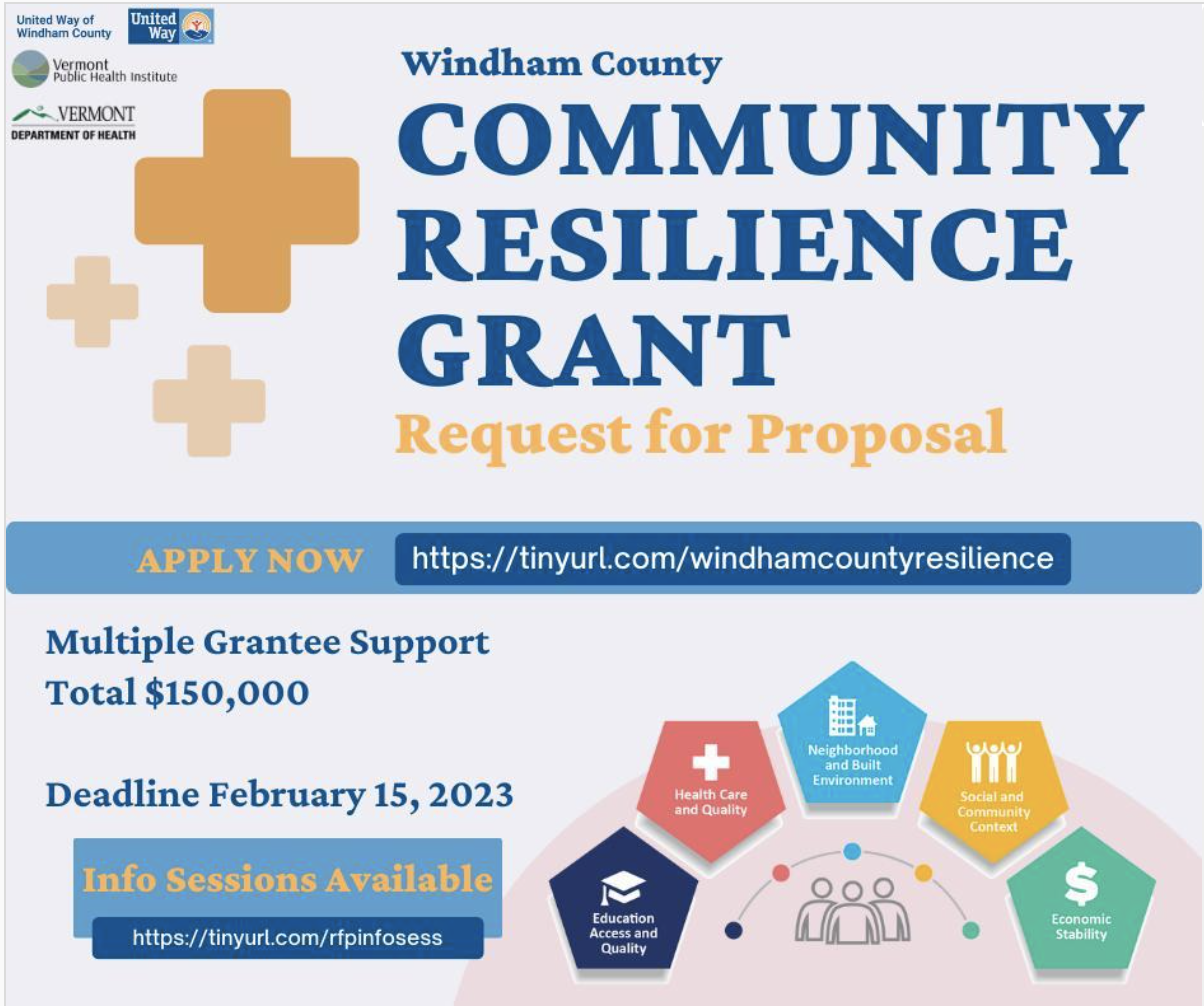 Lunar New Year of China, Korea, and Vietnam
hosted by the Asian Cultural Center of Vermont (ACCVT)
Sunday, January 22nd, 2023 at the Brattleboro Museum & Art Center (10 Vernon Street, Brattleboro, VT, 05301). 1pm-3pm.
More information on the website: https://accvt.org/ Inquiries: 802-257-7898 ext 3; day of event: 802-579-9008 and at the Brattleboro Museum and Art Center.
Asian Cultural Center of Vermont (ACCVT) celebrates the Lunar New Year of China, Korea and Vietnam Sunday, January 22nd 1-3pm. All ages welcome! You don’t have to be Asian or know anything about Asia to participate! Join us at the Brattleboro Museum and Art Center to usher in the year of the Black-Water-Rabbit. The sign of Rabbit is a symbol of longevity, peace, and prosperity in Chinese culture and promises a period of rest and reflection after the dynamic Year of the Tiger. We will start our celebration with a potluck. Then join us for traditional Chinese Dance with Li Fei Osborne, group Taiji and Qigong with Cai Xi, the Korean rope-tug and traditional New Year songs and crafts. Make your own New Year banner! We end our celebration with a Dragon parade up from the Museum towards Main Street to bring us luck for the coming year. Don’t miss the chance to dance with the 30-foot dragon. This extraordinary dragon was created by an accomplished Vietnamese craftsman. According to Chinese folklore, this enormous marionette, requiring at least 9 people to hold, is forever chasing the ‘heavenly pearl’ in its pursuit of wisdom. 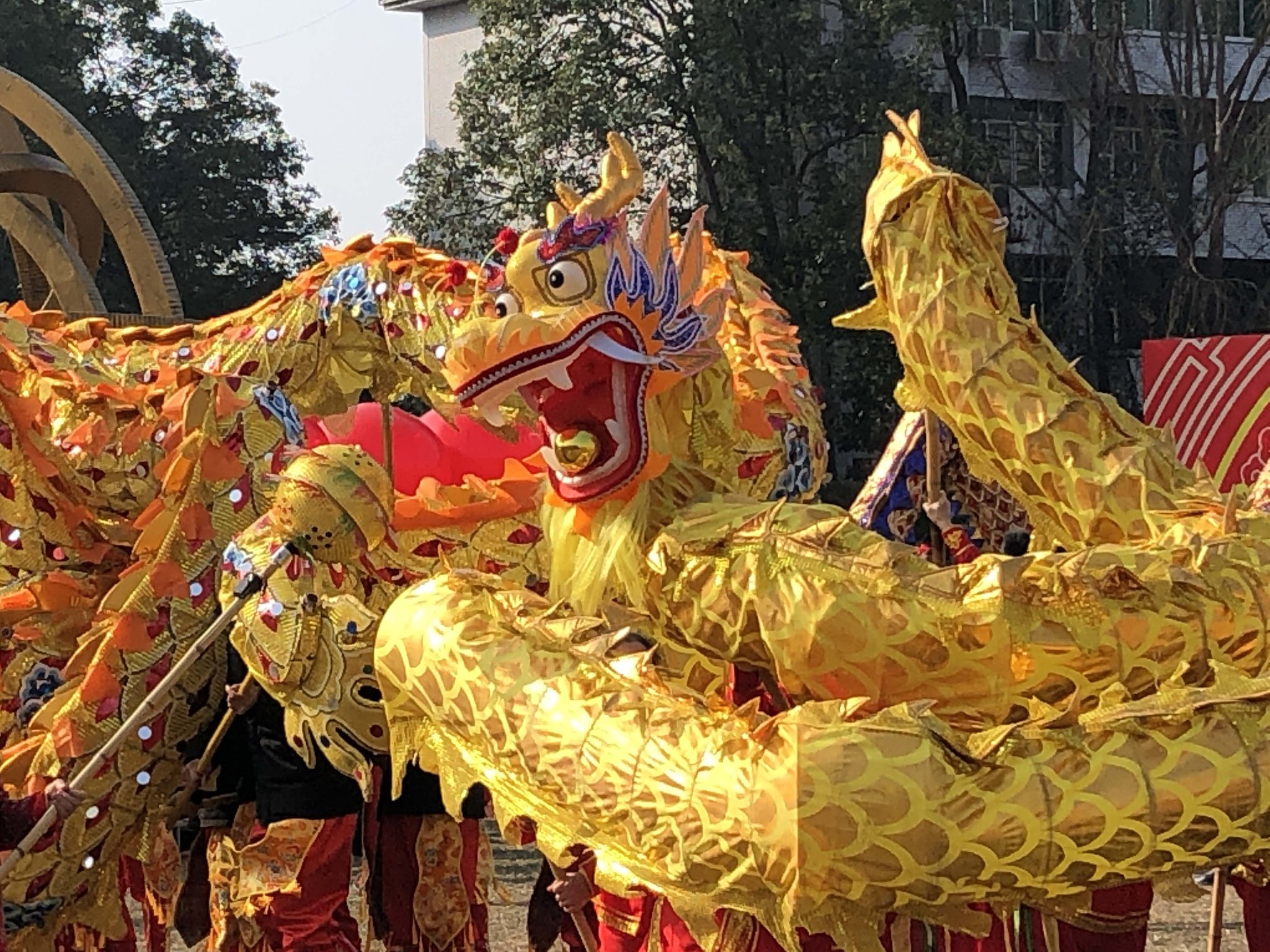 Brattleboro Concert Choir: “Help! Music for Troubled Times"
Saturday, January 21st, 2023 at the Latchis Theatre (50 Main Street, Brattleboro, VT, 05301). 7:30pm-9pm.
Sunday, January 22nd, 2023 at the Latchis Theatre (50 Main Street, Brattleboro, VT, 05301). 4pm-5:30pm.
Masks required. For tickets, please go to app.arts-people.com/index.php.
“HELP! Music for Troubled Times” is the theme of two Brattleboro Concert Choir concerts, scheduled for Saturday, January 21, at 7:30 p.m. and Sunday, January 22, at 4 p.m. at the Latchis Theatre, Main Street, Brattleboro.
According to Jonathan Harvey, BCC Director, “Our program is focused on the idea of asking for, and receiving, aid. In this turbulent age, seeking help is an act both of necessity and of bravery, and the pieces on the program all touch on this idea from different perspectives. In the music of two 20th century musicians -- Black Canadian-American composer and conductor Nathaniel Dett, and British composer and organist Herbert Howells -- we find cries for help that are in turns quiet, insistent, humble, violent, polite, grandiose, sacred, and secular.”
Harvey explains that Dett and Howells both wrote in styles that have clear stylistic roots, but are profoundly individualized and idiosyncratic.
“For a listener, this means you will hear music that is somewhat familiar on its face, but just beneath the surface is filled with surprises and twists,” he says. “Quite often, these surprises are all about strengthening the emotional impact of a musical moment -- this is very deeply felt music.”
______

"Progress in this country has never been easy. It takes time. And always in the face of injustice and adversity, we have continued to fight. The new year is a great opportunity to renew our commitment to serving [our country] and honoring each other’s humanity."
--Judge Cheri Beasley, 2022 Candidate for the U.S. Senate North Carolina
(quote provided by our dear friends at Lean Left VT)

We hope you are having a fantastic weekend, WeCAN readers. This week's email boasts 9 new entries (!), many of which are happening this week. In this email, you'll also find a few events happening outside Windham County, such as Monday's celebration of Dr. Martin Luther King, Jr. in Keene, NH. We urge you to make the trek if you are able, to celebrate Black History and the fight for racial equality. If you're in the Queen City this week, you can also choose events happening in Burlington in honor of the holiday. Or, perhaps you'd like to spend Monday in a day of service, volunteering for a local organization--your talents and skills are always needed! If you need assistance or wish to be connected with a non-profit, email us at [email protected] and we will help you find an organization that fits you.
Have a great week, WeCAN Community!

HAPPENING OUTSIDE WINDHAM COUNTY: KEENE, NH
Rediscovering Black History in the Monadnock Region: A Dr. Martin Luther King, Jr. Day Celebration
hosted by the City of Keene and the Historical Society of Cheshire County
Monday, January 16th, 2023 at the Historical Society of Cheshire County (246 Main Street, Keene, NH). 10am.
Questions: Contact Andy Bohannon, (603) 357-9829. *Project supported by NEH and C&S Wholesale Grocers. *Event supported by the City of Keene Human Rights Committee.
The Historical Society of Cheshire County relies on historical resources to communicate local history. The documents, photographs, and artifacts preserved in its archives have led to hundreds of talks, workshops, walking tours, exhibits, school resources, and publications. Yet, there are gaps in the collections. There are stories missing from our local history, memories not preserved. The "Recovering Black History in the Monadnock Region" project is filling in some of those gaps using citizen archivists. In her presentation, director of education Jennifer Carroll will share more about this project, including some initial discoveries and future goals.
______

"A worthy New Year's resolution, perhaps, is to take no hatred into the New Year without requiring it to restate its purpose."
-Robert Brault
a free-lance writer for forty years, has appeared in publications and venues ranging from Reader's
Digest to the CBS TV series "Criminal Minds" to the Ivory soap wrapper.

Hello friends, and Happy 2023! You may have noticed a brief hiatus from WeCAN in the last few weeks; a much needed holiday recess was followed swiftly by a bout with Covid, which left this Editor down for the count and unable to do much of anything while recovering. We are back, though, with an email chock full of ways to get involved with your community during these cold Winter months. Take a look at what's new and grab your brand new, 2023 calendars to make a solidarity plan--we look forward to seeing you at an event, lecture, meeting, or workshop soon!

Our focus for 2023 will be on Wisconsin and Virginia.

In April, Wisconsin voters will elect new Supreme Court justices. The re-election of Tony Evers for Governor was critical, but to put a check on the right-wing’s legislative agenda, justices must be elected who will protect voting and reproductive rights and deal with the extreme gerrymandering in the state.

In Virginia, the election for the House of Delegates will take place in November. Currently, the  Democrats have 47 seats, and the Republicans hold 51. There are two vacancies. This year all 140 seats in the General Assembly will be on the ballot — under new legislative maps seen as more favorable to Democrats. Helping Democrats break the current trifecta will bring back an agenda that includes protecting reproductive rights, passing sane gun control laws, and addressing the housing crisis and school funding.

"We don't have to engage in grand, heroic actions to participate in the process of change. Small acts, when multiplied by millions of people, can transform the world."
—Howard Zinn
historian and World War II veteran who later developed an anti-war stance

Happy Holidays, WeCAN Family! We hope you and your community are weathering December well and enjoying the sights, sounds, and activism of the season. We are so appreciative of your support and readership during these last 5 years; you have encouraged and supported this small-but-mighty group through your words and actions and we couldn’t be more grateful for all that you do. Thank you and here's to another 5 more years of activism, community, and getting-the-work-done. 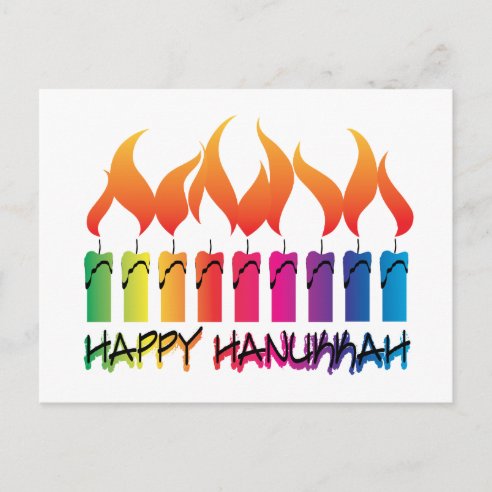